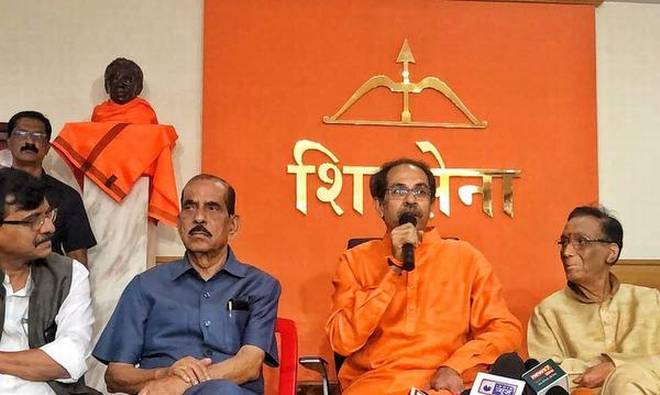 In a dramatic development, Shiv Sena on Tuesday filed a writ petition in the Supreme Court challenging the rejection of its claim by Maharashtra Governor to form Government in Maharashtra and the refusal of Governor to grant three more working days time to demonstrate majority.

It is seeking urgent hearing of the petition today in SC.

The results of the recent assembly elections in Maharashtra returned a fractured mandate, with no single party getting simple majority. BJP emerged as the single largest party with 105 seats, and Shiv Sena, who was its pre-poll ally, came second with 56 seats in the 288 member assembly. NCP and Congress got 54 and 44 seats respectively.

After the declaration of results on October 24, in a surprising turnaround, Shiv Sena withdrew from its alliance with BJP, leaving the scene open for combinations with Congress and NCP.

There was no consensus reached among these parties regarding government formation even by Monday night, the deadline set by the Governor for demonstrating majority.

On Tuesday afternoon, Governor recommended Presidential Rule in the state under Article 356(3) of the Constitution.

In the petition filed under Article 32, Shiv Sena alleges that the Governor's actions were "ex facie arbitrary and malafide".

"The Hon'ble Governor vide the impugned action dated 11.11.2019 acting arbitrarily, in hot haste and in complete violation of the law laid down by this Hon'ble Court in SR Bommai vs UOI, (1994) 3 SCC 1, has rejected the claim of the Petitioner to form the Government and has also refused to grant even three days time to the Petitioner to demonstrate that it has the requisite majority to form the Government in Maharashtra" states the petition.

The plea further contends that the factum of majority cannot be decided by the Governor in his own subjective assessment and the floor of the House is the only 'constitutionally ordained forum' to the test majority".

The Governor is duty bound to allow reasonable time for political parties to conclude their negotiation on government formation and not act as an agent or mouthpiece of the Central Government. The Governor has committed sheer breach of constitutional conventions having the force of law, states the petition.

Shiv Sena claims in the petition that Congress and NCP are "principally willing" to support it, and the talks with them have reached an advanced stage. It is further mentioned in the petition that its long association with BJP came to a staggering end due to certain "fundamental political differences".

The BJP was invited by the Governor to form Government only after an inaction of 18 days, and was given 48 hours to show its majority. When the BJP was unable to do so, after one day, the petitioner was called and was given 24 hours time.

The petition seeks a direction to quash the decision taken by the Governor on November 11 to reject the claim of Shiv Sena to form Government and to deny extension of time for Shiv Sena to prove majority.

The party further seeks a declaration that majority can be shown only through a floor test and not on the basis of subjective assessment of the Governor.